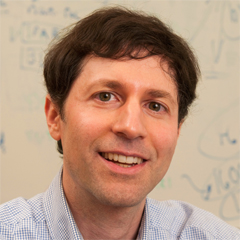 The principal investigator received his Bachelor's degree in Chemistry from Princeton University in 1995 and a Ph.D. in Chemical Physics from Harvard University in 1999. He then performed postdoctoral research at Duke University and Princeton University. From 2002 to the present time, he has been on the faculty of The University of Chicago in the Department of Chemistry and The James Franck Institute. He has been awarded an Alfred P. Sloan Fellowship, a David and Lucile Packard Foundation Fellowship, the Camille and Henry Dreyfus Teacher-Scholar Award, the NSF CAREER Award, and the Microsoft Newton Award.


Professor Mazziotti has organized symposiums in his area of expertise, including the symposium: "Reduced Density Matrices in Quantum Chemistry," at the 2011 American Chemical Society (ACS) National Meeting in Boulder, CO. He has edited the book, Two-electron Reduced-Density-Matrix Theory for Many-electron Atoms and Molecules, in the Advances in Chemical Physics Series. He has also developed software for electronic structure calculations with reduced density matrices, which is available from his research group's website. Professor Mazziotti's research interests lie at the intersection of chemistry, physics, biology, and applied mathematics, with special interest in advanced molecular electronic structure.